Back to all posts

Christian worship should cause us to let go of self-sufficiency. Of course, this flies in the face of what we naturally pick up from our own culture. Self-sufficiency, independence, self-reliance, survival, and the like have an almost revered status.

True, the old "teach a man to fish" proverb has its place. However, singing, "I am a rock, I am an Island" may not capture the heart of a repentant sinner. Further, to touch on current events, the promises of President after President to fix all societal ills ring hollow. Yes, hope is good, but fool hardy self-sufficiency is a distraction from our ultimate need.

This week, much of our service at Christ Covenant will highlight that need, which is deep and multifaceted. Yet the Lord's provision is deeper and complete, which means ultimately we can respond in gratefulness. 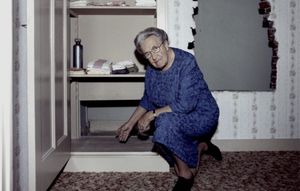 In our home we've been reading A Hiding Place, Corrie ten Boom's account of hiding Jews during the Second World War, eventually being caught, and being imprisoned in a German concentration camp. One especially poignant scene is when her sister Betsie reminds her to be thankful for all they have in their new horrific circumstance, including the fleas that were crawling up their legs. Later, they realize they have the freedom to read their smuggled Bible out loud because their guards would not enter the flea-ridden barracks. As they read, other ladies translate the Dutch into German, French and more, passing the words of life from one bunk to another. The beauty of the scene is stark against the ugly backdrop of the death camps.

We have a hard time imagining the depth of their need. Yet, provision came in the form of fleas and a little freedom from onlooking guards. Amazingly, gratefulness grew in spite of, and even because of their incredibly desperate situation.

The current political state in America (both before the inauguration and now) certainly highlights our spiritual need. But I wonder if our societal mess is actually provision; fleas as it were. I have received a few visceral responses to this suggestion, but the fact that the Ten Boom's trial produced gratefulness long before any of that trial was removed is instructive. I don't want America to fail. I love my country and pray for peace. However, more than this, I want to see the church I love replace self-sufficiency with gratefulness. It's easy to say and hard to live, but trials, need, and provision may be the medicine we need to take.

We print a full bulletin every week (and provide it online here). This not only helps us during corporate worship, it also allows us to walk through the elements of the service later in the day or during the week. Take it home, read through it again, and this week return to the opening hymn several times. There we are reminded that we hurt and he heals, we know grief and he brings peace; we despair and he gives hope; we need and he provides. To God all praise and glory.